Why global mobility will not be disrupted by Tesla, Uber & Co.

On June 20, 2017 the Wall Street Journal issued an article under the headline „The end of car ownership – Ride sharing and self-driving will redefine our relationship with cars. Auto makers and startups are already gearing up for the change“ (see: https://www.wsj.com/articles/the-end-of-car-ownership-1498011001). The article is worth reading, however I perceive it as far too optimistic with regard to the future market potential of shared self-driving electric cars. In fact the article could be written by the Marketing&Promotion departments of Tesla and Uber. It cries for a counterplea, which I am happy to provide in the following.

What brings me to this opinion? Well, in fact I am convinced, that your technology, concepts and business models are neither customer-driven nor do they solve real problems. Instead they are only scratching at the surface. Shared self-driving electric cars are primarily a „yuppie snowflake nerd hype“ (as one of the readers of the Wall Street Journal article above deridingly dared to remark) initiated and promoted by biased „investors“ who primarily want to earn big bucks, but unfortunately are neither focussed on sustainably resolving major global problems, no did they properly think the whole concept through up to the end.

Individual mobility based on combustion engine technology is almost 150 years old and its increased utilization by hundreds of millions of drivers certainly led to various significant global problems and aberrations, such as air pollution, traffic jams or even gridlocks. However shared self-driving electric cars can and will not solve these problems and aberrations in an adequate, convincing and sustainable way.

By 2050 approx. 5.27 billion people (= approx. 54% of the overall world population) will according to the UN Total Population Report live in the following top 10 countries (source: https://esa.un.org/unpd/wpp/Download/Probabilistic/Population/):

In terms of population of cars, the World Economic Forum (WEF) reported in 2016 a prognosis, which is based on figures provided by the research house Bernstein. According to this prognosis, the number of cars worldwide is set to double within 25 years from 2015 to 2040 (see: https://www.weforum.org/agenda/2016/04/the-number-of-cars-worldwide-is-set-to-double-by-2040) – more concrete: the global number of passenger vehicles will increase from from 1.1 billion in 2015 to 2.0 billion in 2040, whereas the global number of motor trucks will increase from 0.38 billion in 2015 to 0.79 billion in 2040.

Based on this prognosis, we will probably not be totally wrong, if we assume, that the total number of passenger vehicles in 2050 will be around 2.35 billion and the total number of motor trucks around 0.95 billion – both on a global basis. In the nutshell this means that in 2050 approx. 9.8 billion people around the globe will utilize approx. 3.3 billion passenger vehicles and motor trucks – which is roughly a 33.7% coverage.

Germany, which is famous for its car manufacturing industry (and its reliable statistics), could be used as an illustrative example for what happens, if societies grow and become more wealthy.The following data are an abstract from a table provided by the German Federal Office for Motor Traffic under https://www.kba.de/DE/Statistik/Fahrzeuge/Bestand/FahrzeugklassenAufbauarten/b_fzkl_zeitreihe.html, which shows, that the total number of vehicles in Germany increased within the last 57 years from approx. 8 million in 1960 by almost 600% to approx. 55.6 million in 2017. Approx. 90% of these vehicles are today passenger vehicles and motorcycles (in 1960 it was a slightly smaller percentage of approx. 80%). 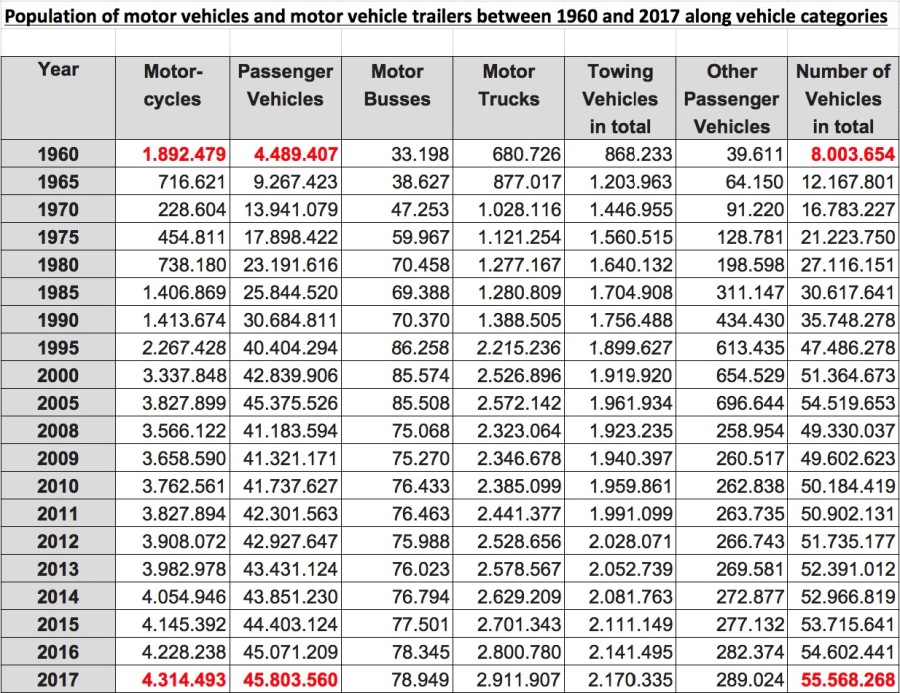 This huge increase of the number of vehicles in total reflects the development of income and wealth in Germany in course of the „Wirtschaftswunder“ after the second world war. People became more wealthy and at the top of their wish list was an own car, an own house, good education for their kids as well as nice holiday trips and good food.

For the (German) people in the 1960s and 1970s own cars were status symbols, which allowed these people to demonstrate to their friends, neighbors and fellow workers that they „made it“ and they were able „to afford something“.

So, what do these numbers and insights mean for the disruption of global mobility? Note: The following hypotheses are consciously formulated in a provocative way, since I want to initiate a controversial discussion:

Under consideration of the aforementioned facts and arguments I do not believe, that shared self-driving electric cars are a convincing and adequate answer to the major problems caused by an increasing number of people and vehicles with traditional combustion engines. Tesla, Uber and other self-proclaimed protagonists of the shared self-driving electric car industry are far away from disrupting global mobility, since their technology, concepts and business models are neither customer-driven nor do they deliver a significant and sustainable contribution to the resolution of environmental pollution or gridlocks. Instead, Tesla and Uber are just riding a wave powered by so called „investors“ who caused a huge hype with ridiculous high market capitalizations primarily because they want to earn money instead of providing breakthrough answers to burning questions. Ultralight or microlight aviation with vertical take-off and (autonomous) self-flying capabilities is a much more promising approach (possibly combined with an electric power system if this technology is proven to be more eco-friendly than other power trains, such as e.g. the fuel cell).

Just my 5 Cent. And now I am interested in your feedback …

P.S.: Continuative Information (unfortunately only available in German language) comprising some valuable facts, which I utilized in my argumentation:

I am one of the leading experts for analyzing and improving organizations with more than 30 years of experience in international high-tech companies (Siemens, HP, ThyssenKrupp). My portfolio comprises business-oriented, high-quality consulting and interim management services on executive level in the following areas: Interim Management for CDO/CIO/CTO functions, IT Due Diligences&Maturity Checks, Strategic IT Management (IT Strategy, IT Architecture, IT Portfolio Management), Reorganization&Restructuring of IT Organizations&Processes, Optimization of IT Purchasing, IT Security Management including Cyber Security, Management of IT Governance, Risk and Compliance (GRC) as reliable basis for IT Compliance, Professional Coaching, Training and Team Building, independent Expert Opinions, professional Assessments, and Keynote Speeches. I like complex challenges (e.g. build up new company units, restructuring, turnaround) with significant impact on the overall success of the company. One of my hobbies is ancestry research. I can track my ancestry tree 29 generations back to the year 1368. In course of my research I found out, besides others, that one of my female ancestors, her name was Walpurga Bruebach, was beheaded and burned as a witch at the stake on Friday, October 26, 1657. Alle Beiträge von Kurt Brand anzeigen