There is a series of more or less systematic examinations, which deal with the question, why startups become successful. Exemplarily I would like to refer to the examinations provided by Bill Gross, who founded the incubator „Idealab“ (http://www.idealab.com) in California in 1996, and since then accompanied roughly 100 startups, of which from his point of view „many were successful and many failed“.

For each of the 200 examined startups Gross rated each of the 5 critical success factors on a scale between 1 and 10. When starting Idealab he thought, the ideas were most important. Over the years, the team gained more and more importance. But the analysis led to a totally different result. According to the analysis timing is the most important factor, which makes the difference between success and failure.

Gross provides examples: Airbnb’s idea, to believe, that people would rent their private rooms to strangers, was considered as absurd at the beginning. However the timing was perfect, since Airbnb’s start fell into a phase, where people needed additional money (and the principle of shared economy rapidly gained importance).

On the other hand, a video platform, which was promoted by Idealab, was not successful, since at that time neither browser, nor network bandwidth were mature and efficient enough. Two years after the project was shut down, the technology reached the necessary level of maturity and efficiency and YouTube started its triumphal procession.

So far, so good and comprehensible …

But, what do particularly successful startups, which developed to digital champions, have in common? Or asking the same question in a different way: Is there a „cooking recipe“ with ingredients for the digital champions of tomorrow?

When you look at digital champions, such as Apple, Google, Amazon or Facebook, as example, you can already deduce from the tremendous success of the iPhones, the Google search engine, the Amazon marketplace or Facebook’s social networking platform, which led in most of the cases to a market dominating position, a multitude of „ingredients“, which can be utilized in terms of critical success factors as well by other companies, e.g.:

Important: In many cases the business models of digital champions lead to a sneaking elimination or displacement of local/regional middle-men or brokers/agents, which have been dominating the regional market for decades. Amazon for example reduced the market share of book stores at the beginning and now penetrates other markets, which were covered so far by e.g. food stores, perfumeries or builder’s merchant’s. Uber pushes local taxi operators and taxi companies aside, Airbnb attacks travel and tourism agencies and the blockchain technology poses a threat to the business model of banks and insurance companies. Comparison portals, such as check24.de or smava.de already significantly changed the nature of the insurance branch.

By the way, you don’t need to invent innovations always by yourself. Apple, e.g. picked-up and leveraged third party innovations, such as the Xerox mouse, and made it available for a broader group of buyers. In Germany several startups were able to develop quite successfully, since they picked-up ideas from the US and adapted it to the needs of the German market and/or specific user-groups (e.g. StudiVz.de, Lokalisten.de). During the past years digital champions rose in China, e.g. Alibaba, which copied the business models of Amazon or Ebay and adapted it to the Chinese market. The most popular categories of the app stores (e.g. shopping, social networks, games, photo&video, entertainment, travel, food&beverage, health&fitness) provide indications, which business models could be most promising. 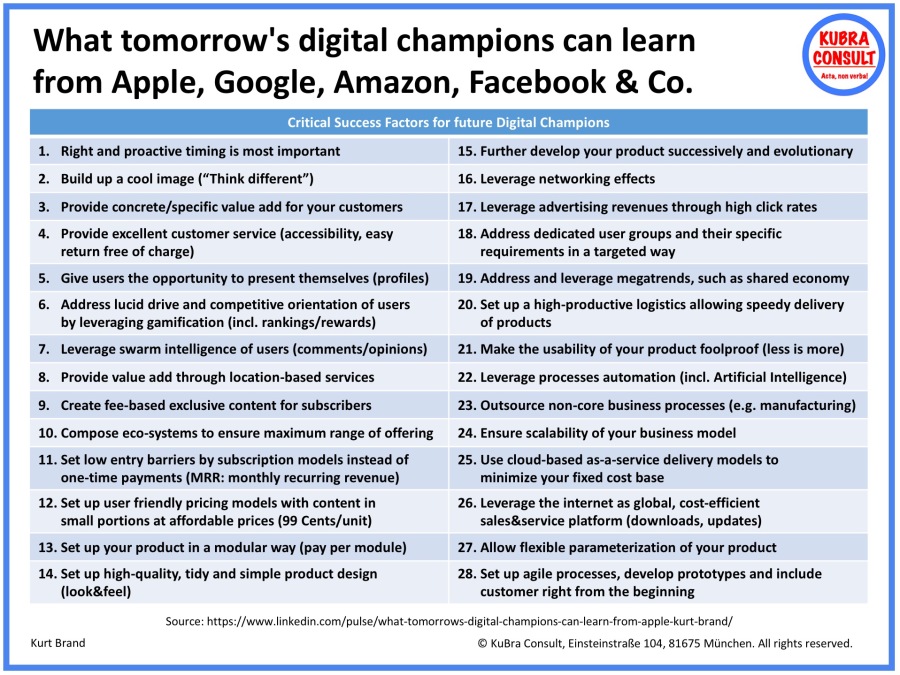 Paradigm Shifts for managers in charge of linear business models: 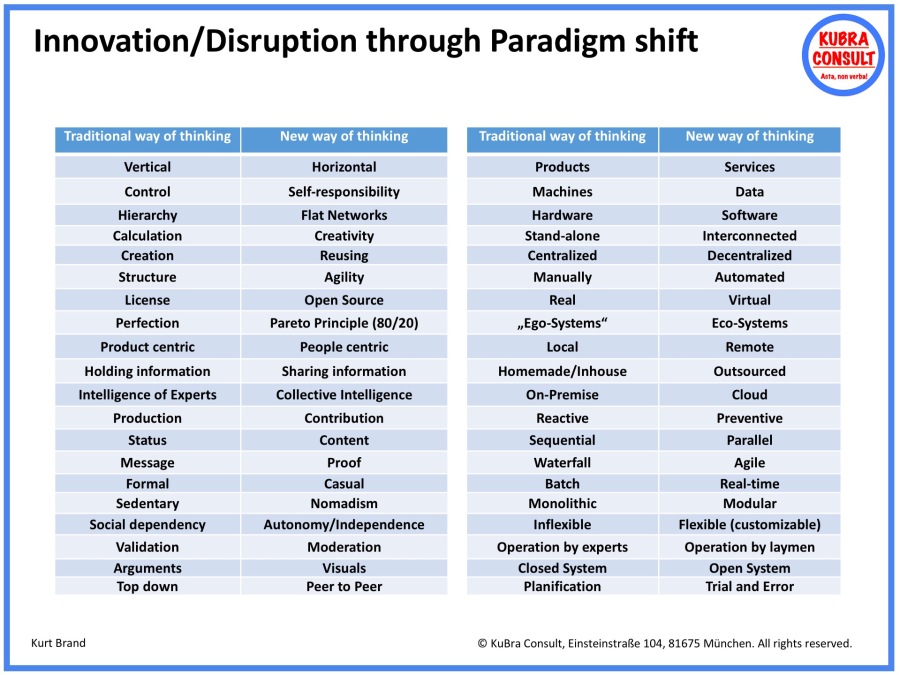 The aforementioned (still comparably unstructured) list of obvious, reusable patterns is a first draft, which I will successively further develop and refine. Suggestions and ideas for improvement are highly welcome.

Unicorns are companies (usually startups), which have yet to show any special success, but already have reached market capitalization of 1 billion USD or more. CBINSIGHTS.com provides a continuously updated list of all global Unicorns: https://www.cbinsights.com/research-unicorn-companies. On August 8, 2018, this Unicorn list comprised 259 companies with a total cumulative valuation of $837 billion.

STARTPLATZ is a German start-up incubator and accelerator with locations in Cologne and Düsseldorf and a meeting place for the Rhineland start-up scene.

As the comments at the beginning of this blog show, financing is a very important success factor for startups. On June 4, 2018, Carolin Gattermann published a very informative blog on the STARTPLATZ homepage on the topic „5 crowdfunding possibilities in Germany – crowdfunding platforms“: https://www.startplatz.de/crowdfunding-plattformen/.

There you will find basic explanations on the differences between crowdfunding, crowd investing and crowdlending, a short description of the offerings of well-known crowdfunding platforms (such as Kickstarter, Startnext, Steady or Indiegogo) or tips for designing your own crowdfunding campaigns.

An exciting question is whether platforms will still be needed for such purposes in the future, or whether a direct connection between microinvestors and entrepreneurs can be established, e.g. with the help of blockchain technology. A simple, uncomplicated mechanism, which, for example, enables 50,000 microinvestors to invest €1 each in an attractive startup at the click of a mouse, would open up new, very dynamic and flexible possibilities for financing off the beaten track. However, the cases of fraud in initial coin offerings (ICOs) show that this is not risk-free.

In my complementary blog „The Chief Information Officer’s ultimate reading list“ published on May 18, 2018, you’ll find an overview of my most important blogs on digitalization, platform economy, organization and company culture development, hiring of employees, personality development, crisis management, data privacy, cyber security and many other topics: https://kubraconsult.blog/2018/05/18/the-chief-information-officers-ultimate-reading-list/.

Interesting source illustrating the development of Apple computer devices from 1976 on:
http://www.mac-history.de/zeitleiste-die-entwicklung-von-apple-seit-1976

Another interesting source describing the „50 most influential gadgets of all times“:
http://time.com/4309573/most-influential-gadgets/

I am one of the leading experts for analyzing and improving organizations with more than 30 years of experience in international high-tech companies (Siemens, HP, ThyssenKrupp). My portfolio comprises business-oriented, high-quality consulting and interim management services on executive level in the following areas: Interim Management for CDO/CIO/CTO functions, IT Due Diligences&Maturity Checks, Strategic IT Management (IT Strategy, IT Architecture, IT Portfolio Management), Reorganization&Restructuring of IT Organizations&Processes, Optimization of IT Purchasing, IT Security Management including Cyber Security, Management of IT Governance, Risk and Compliance (GRC) as reliable basis for IT Compliance, Professional Coaching, Training and Team Building, independent Expert Opinions, professional Assessments, and Keynote Speeches. I like complex challenges (e.g. build up new company units, restructuring, turnaround) with significant impact on the overall success of the company. One of my hobbies is ancestry research. I can track my ancestry tree 29 generations back to the year 1368. In course of my research I found out, besides others, that one of my female ancestors, her name was Walpurga Bruebach, was beheaded and burned as a witch at the stake on Friday, October 26, 1657. Alle Beiträge von Kurt Brand anzeigen